A selection of winter squashes

A clear sunny morning was the perfect opportunity to harvest our abundant crop of winter squashes for further ripening and hardening off under cover before the first frosts appear.

It has been an odd year on the allotment.  Some of our stalwarts like purple and runner beans performed poorly, having either rotted in the sodden earth in early summer or fallen prey to the hordes of slugs and snails that appeared in the wake of all that rain.  The tomatoes too were affected by blight for the first time ever and we lost the entire crop. 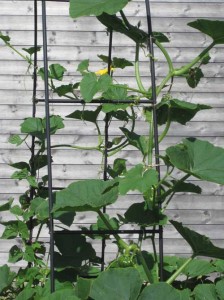 By contrast the summer and winter squashes put on a  marvelous show in terms of both colour and quantity.  For summer squash, it is hard to beat courgette trombocino, which will happily climb  or scramble at ground level , producing  lots of tasty trombone shaped fruits. Firm and sweet fleshed when eaten young, or you can  harden them off and treat like a winter squash too. Alternatively enter the more fetching specimens in the best dressed vegetable competition at your local country show and be prepared for groups of giggling gawpers and a panaply of rosettes.

But it is the winter squashes that have been the most spectacular.  This year we grew five varieties.  Crown Prince is probably our favourite.  With its blue-grey skin and perfect pumpkin shape it it would take the mere flick of a wand to be transformed into a fairytale carriage.   Plus it is the most long lasting of all the squashes, keeping up until Easter of the following year if stored correctly. 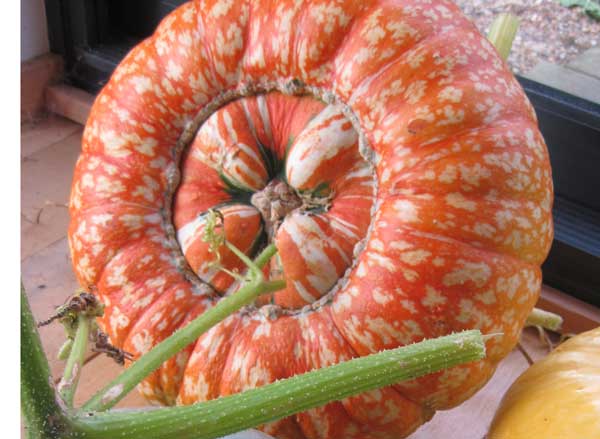 A close second has to be the magnificent Turk’s Turban, with its mottled orange, cream and green skin and turban shape.  This too is a good keeper.  Top marks also go to the smaller onion shaped Red Kuri. Another firm fleshed variety,  it is particularly good blanched and baked in the oven gratin style with some crumbled feta cheese, chopped rosemary and breadcrumbs.  Since we have a good half dozen of these, friends be warned, this is  going to be a regular addition to the autumn menu!!

Small squash are perhaps  more versatile than the whoppers because they can so easily be baked whole; just cut off the top and add a smattering of butter and some seasoning to the centre before replacing the lid and baking for around 45 minutes in a moderate oven.  Burgess Vine Buttercup are the perfect shape for this and like trombocinos, will happily clambour over a trellis or arch.  So useful in garden or allotment where space is at a premium as all squashes are real land grabbers.  The Burgess Buttercup is a heritage variety and available from the Real Seed Catalogue, which is well worth checking out if you are interested in growing more interesting vegetable varieties. 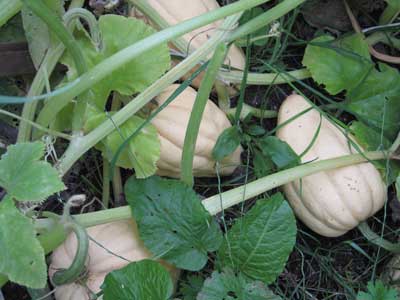 Finally, Thelma Sanders; another heritage variety and new to our allotment, where it grew like crazy and produced the strangest cream coloured fruit that we christened dragon’s eggs as we spied them glistening amongst the tendrils and greenery.